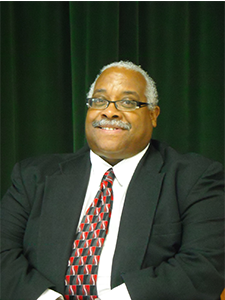 Rev. Dr. Kevin Norvell Taylor is a native Detroiter and proud product of the Detroit Public School System. Upon graduating from Mackenzie High School June 1970, he attended Michigan State University earning a Bachelor of Science Degree in Biology in 1974. He later attended Wayne State University earning a Bachelor of Arts Degree in Sociology June 1985. Rev. Kevin Taylor continued his education with graduate studies in Biology at Wayne State University in hopes of becoming a Medical Doctor. Having been led by the Holy Spirit he transitioned into focusing on Religious Education. He studied at the Ecumenical Theological Seminary in Detroit Michigan earning a Master of Divinity Degree June 2012.  He then earned a Doctorate of Divinity in June 2017.

He has been a Member of Hartford Memorial Baptist Church for 41 years. He started employment with Hartford church in 1993 and currently serves as Assistant Pastor. Rev. Taylor has served as a Hartford Youth advisor since 1984. He was ordained a Deacon in October 1988. He later answered his call to Ministry where he preached his trial sermon and was licensed to preach in March 1996. He was ordained in Ministry by the Pastor of Hartford, Dr. Charles G. Adams, through the Progressive National Baptist Convention in 2007. Rev. Taylor presently sings in 2 choirs, the Hartford Male Chorus and Jubilee Chorus. Rev. Kevin also serves as the Director of the Hartford Men’s Liturgical Dance Ministry and has served as Co-Director of the Married Couples Ministry for 5 years. Monthly, he is Hartford church’s 1st Sunday Worship service Liturgist and preaches at the Saturday Night Service.

Rev. Kevin Taylor is married to Trustee Artistine Taylor and has one daughter, Renee. He is a born again man of God and a stage 4 Cancer survivor. He is a firm believer in the power of prayer and the word of God. He affirms that serving the Lord is an Honor and a Privilege. He truly loves the Lord and serves the people of God with Gladness.